At Serum Institute, HRH Prince of Wales takes an update on MMR vaccine

On their maiden visit to the city, Prince Charles and his wife Camilla Parker Bowles on Sunday made a special stopover at the Serum Institute of India. While the Prince of Wales interacted with scientists and senior officials at the manufacturing facility, plants globally, the Duchess of Cornwall paid a visit to the legendary Poonawalla stud farm.

Charles attentively listened to the staff, asking questions about pneumoccocal and MMR vaccines and was impressed with the research and development laboratory.

"While there is no collaboration yet, we are already working with several UK-based agencies (working in the field)," he added.

"It has taken a lot of effort and various trips to the UK following which Prince Charles agreed to visit the institute. Perhaps our work in saving children's lives was close to his heart and he agreed to make this private visit to our facility," said Adar Poonawalla, Executive Director, Serum Institute of India.

Adar Poonawalla and his father Dr Cyrus Poonawalla, the chairman of Poonawalla Group, introduced Charles to the representatives of key agencies that Serum has been working with. More than 10-12 senior scientists and directors, including S R Mundra, S S Jadhav, S Ravetkar, R Dhere, M Phadke and others, explained to Charles the work done at the institute. 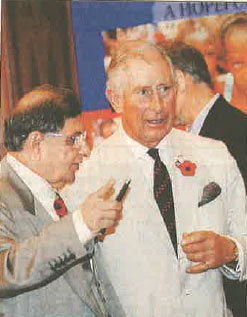 Charles took special interest in the immunisation vaccine against measles, mumps and rubella (MMR). In the UK, it had been a subject of controversy after a paper was published on its side-effects.

However, subsequent scientific studies showed the MMR vaccine was safe. Charles wanted to know whether children were getting vaccinated against MMR in India, scientists told Newsline.

Posters depicting the institute's work, such as the MenAfriVac vaccine that has helped Unicef address the meningitis epidemic in sub-Saharan Africa, were displayed at the hall. A major project at the institute has been the rotavirus vaccine, the phase III trials for which are currently on. A standalone pneumococcal vaccine and a vero cell rabies vaccine are in the late stages of development here.