Charity has different faces, and the Microsoft founder wears one defined by humility, found the Poonawallas as they showed him around their vaccine manufacturing facility.

It is easy to be overawed by a man like Bill Gates, especially when he is your private guest on his second visit to the city. Healthcare, sanitation and education for the underprivileged across the world have been his priority since Gates unconsciously declared himself as one of the rare billionaire philanthropists. Once the Poonawallas, his hosts in the city last Thursday, got over their awe and admiration for the man, they decided to watch him closely, if only to learn what makes him tick.

“Anybody can donate money for charity but this man is not doing only that. He is educating himself by spending his precious time visiting every village which is on his radar of providing healthcare and sanitation facilities,” said Cyrus Poonawalla. “Humility is his hallmark. The most important lesson I learnt from him is that charity has different faces. For him it is saving lives of children in the Third World where poverty does not allow them to get even basic healthcare. The time that he spent at Serum Institute of India was a memorable experience for all of us. Gates had added a few more admirers to his already huge list. Let me be honest, it simply was a humbling experience for me,” said the man who Gates considers as one of his “seven vaccine heroes”. L-R: Bill Gates, Adar and Cyrus Poonawalla at the Serum Institute on Thursday

Cyrus was not alone in being left awestruck by the modesty shown by the former chief of Microsoft. His son Adar, who was constantly by Gates’s side as he showed him around Serum, was clearly mesmerised by the 57-year-old guest’s passion for philanthropy.

“Gates has developed a passion for saving lives around the world mainly, his interest being the Third World, particularly. He wants to source affordable vaccines for the 20 most common diseases, which he believes can save millions of lives,” Adar revealed.

Adar added, “His quiet demeanor speaks. It projects the face of a man who is on a mission. What struck me most during our interaction was his eye for detail and his belief that every minute is ‘very precious’, hence never to be wasted.”

Before he arrived, the Poonawallas thought that they might interest him in other ideas and happenings around the country. Gates, though, was focused. Right now medicines and vaccines were his objective; and he was more interested in learning how fast the company could manufacture the new Injectable Polio Vaccine and what clinical trials were in progress to create more vaccines. 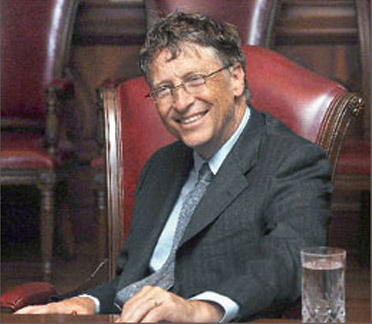 “I don’t know about anybody else, but Gates has surely taught me that apart from donating money, there can many more ways in which charity can be done. How does a man like him work so tirelessly for the development of medicines, I wondered. I was really curious to know where he draws such bountiful energy from, and most importantly, how does he keep his motivation going,” said Adar.

Adar recalled that when they were at dinner, savouring some silken smooth butter chicken and naan, Gates only wished to speak about healthcare and not the origins of one of the country’s favourite food exports to the West.

“Watching him at such close quarters I am now inspired to do more for the needy in Pune and the surrounding areas. After the Azim Premji-organised get-together in Bangalore,

attended by a few high-ranking Indians on the Forbes List on Friday in honour of Gates, we have decided to acquire a hospital and build new ones too around the city.

We are already funding a few schools in the rural areas but now we want to implement the Premji model for building primary schools on a larger scale as the cost is less,” said Adar.

No chance to indulge in small talk and valuable frivolities, the Poonawallas, we are sure will be astute in the way they divide their time between work and pleasure, thanks to the Gates touch.